Did you think Tamil Nadu is known only for its temples? Here’s a fact check. TamilNadu  the state in India is famous for its churches as well which are centuries old and still stand tall and proud. According to history, Tamil Nadu has witnessed a large influx of Christianity thanks to British rule. When you observe the structure of the churches you can relate the architecture with the era bygone. It is also said that St.Thomas resided in Tamil Nadu in AD 52 and hence the prevalence of Christianity.Let’s know more about Famous churches of Tamil Nadu. Christianity in the state of  Tamil Nadu, which is the second largest religion in the state.The beautifully constructed churches of the city attract not only Christians but every visitor or travellor to witness the splendid architectural designs of these holy places.

1. Basilica of Our Lady of Good Health – this church is located in the Nagapattinum district, in a small town of Velankanni. This basilica is Roman Catholic in belief and has three recorded miracles. The shrine to our Lady was constructed after the three miracles were recorded which were the apparition of Jesus, a sleeping shepherd boy, and Mary, a Portuguese sailor survived a wild sea storm and curing of buttermilk. Every year, on September 8, this basilica celebrates with a feast of Mother Mary and all the worshipers from all over India come to attend it. The basilica is also known as Lourdes of the East. 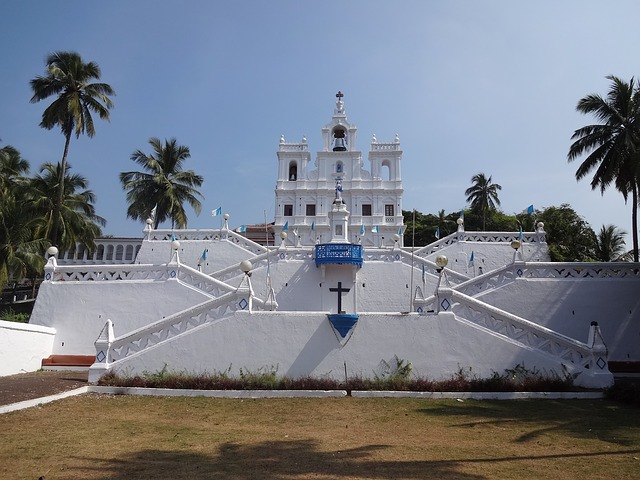 2. Mary’s church– this Anglican Church is the oldest in India. It was constructed in 1678 and two almost two years to build. It was consecrated in 1680 and is widely known as the “Westminister abbey of the east”. The church has a bombproof structure and has two curved staircases that are its prominent feature. The tombstones of this church are one of the British’s oldest in India. Important marriages like that of Robert Clive and Elihu Yale were witnessed in this church. Sir Henry George and Sir Thomas Munro are buried here.

3. The Armenian Church– This church is also famous as the Armenian church of Virgin Mary is one of the oldest churches in Tamil Nadu. It was constructed in 1712. The church is well known for its tower bells which are six in number and weigh 150 kilos each. It should be known that about 350 Armenians lie at rest in the grave adjacent to the church. The Armenian Church is a major heritage pride of Chennai.

4. George’s cathedral –This church is a neoclassical architectural beauty and stands 45 meters tall. It is rich with marble statues, memorial, mural tablets, and pillars. The stained glass windows used to decorate the church depicts the baptism of Jesus and the resurrection of Jesus with Mary Magdalene. There are eight bells in the church each of different size which was manufactured in London. Christians and tourists all over India come and visit the church and feast their eyes on its magnificent structure, the altar, Episcopal chair, and bishop’s chair. It is amongst the famous churches of Tamil Nadu.

5. Thomas Mount National Shrine– This famous church of Tamil Nadu was built on the site where St. Thomas was martyred. The shrine is 300 feet tall and looks over the big city. It is amongst the famous churches of Tamil Nadu and is known for its cleanliness. Two famous paintings namely the Holy Lady and The child and our Lady of Expectations are on display in the St. Thomas church and they are believed to be painted by St.Thomas.

Also know about  Temples of Tamil Nadu- grandeur of architecture