Golconda Fort of Hyderabad- Its Splendor and Grandeur 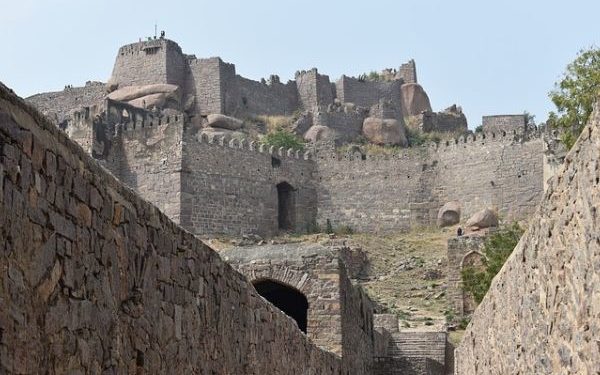 Standing tall, 11kms west of city of Nizam’s is The Golconda Fort of Hyderabad. It’s an amazing example of architecture and engineering. A must see on the list of every tourist, Golconda fort of Hyderabad leaves an everlasting mark on the memory. A historical tour is never complete without stories and Golconda Fort has that in plenty. It is said that
Golconda fort of Hyderabad, once held many precious gems in its heart, even the Kohinoor. It was during the Kakatiya rule that diamond mining was made famous and many precious gems were unearthed. Kohinoor diamond was one among them which now rests in the British crown, is whole different story.

The land where Golconda fort of Hyderabad stands was once just a hill. A shepherd boy had found a Hindu idol there and a temple was erected. It was made up of mud initially but later great rulers like Rani Rudrama Devi and the Qutb shah built the fort and expanded it later on. The 7km wall around the city in the proximity of Golconda fort was built by the Qutb Shah rulers.

Golconda Fort of Hyderabad
hosted many powerful dynasties starting with the kakatiyas, the Musunuri Nayaks, the Brahmi Sultanate and lastly the Qutb shah. Till today Golconda fort exuberates the royal aura.

Fall from glory- Golconda Fort of Hyderabad withstood attacks from Aurangzeb, the Mughal emperor, for 8 years. Fateh darwaza, translated as the Victory gate was named after Aurangzeb finally evaded the fort. Although it was a victory for Aurangzeb, we lost the glory of Golconda fort of Hyderabad as price. Folks staying close to the fort happily recount a story they heard from their grandfathers about a soldier in the Shah army. It was due to treason and bribe that the Fateh darwaza was laid open for Aurangzeb to attack. That one soldier did not accept the bribe and fought single handedly. He received around 70 injurious and survived. Golconda Fort of Hyderabad is famous for its acoustics as well. You can hear many claps near the entrance of the fort and wonder why. The reason behind the clap is an engineering feat, the acoustics.

A clap under the grand portico dome can be heard only inside the Bala Hisar pavilion, which is a full kilometer away. The sound of the clap travels within the walls and the reason behind the acoustics was to hear the whispers of planning and betrayal. The rulers were made aware immediately even if a slightest hint of treachery was whispered.

The water systems, secret passages and water pits add to the various stories of the fort. The secret passages that connect the darbar halls to the outside of the city have not yet been found. A passage that connects one darbar hall to Charminar is said to also exist but the civilians are not made aware about it. Golconda Fort has its own water systems hence it was able to sustain the siege laid by Aurangzeb. The stories of Golconda fort of Hyderabad are better to be felt than read. Go on now, start planning the
visit and remember to buy souvenirs.

Also know about   Enjoy the Late Night Hangouts in Hyderabad